After the tragic attack in the Bangladeshi city of Dhaka last July, the family of one of the victims, Simona Monti who was pregnant when she was killed, gave a generous donation to help ACN build a new church. The first stone of this new church San Michele at Harintana, a small southern Bangladesh town in the diocese of Khulna, was recently laid. 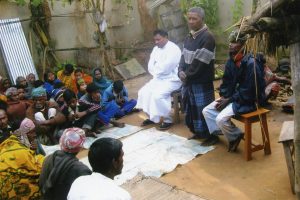 “I am very happy about your generous support for my projects” the Bishop of Khulna, Mgr James Romen Boiragi, wrote to ACN  “in particular, I am grateful for the Harintana church. I was eager to complete it. I have no words to express my joy. I thank from my heart those responsible at Aid to the Church in Need. You’ll be pleased to know that on 27 September, I went to Harintana to lay the first stone of the church. Many, many thanks! “.

Alessandro Monteduro, the director of ACN-Italy, also expressed his gratitude to the generous benefactors who had made the building of the church possible, especially the Monti family. He said “When I was contacted by Simona’s family I realized that thanks to their generosity we had the opportunity to react to terrorism with a concrete project, with the hope we could defeat the horror. Up to now the 125 Catholics in Harintana have been forced to cross two rivers to reach a wooden church, which is damaged and too small to accommodate the entire community during the festive mass.When the construction of the new church is complete, the faithful will finally have a proper place of worship where they can assemble and increase their knowledge of the faith.

According Monteduro this event is particularly important also for its symbolic value.  ACN is engaged worldwide against extremism and the best way and most appropriate way to respond to this is to strengthen the persecuted minorities.  “From January 2015 to date our Foundation has carried out projects in Bangladesh totalling more than 750,000 euro, and we hope to do a lot more thanks to our amazing community of benefactors, “concluded the Director of ACN-Italy. 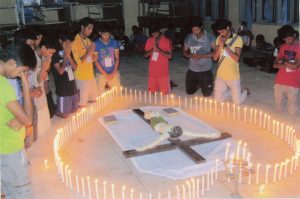 Bangladeshi security forces last Saturday killed 12 members of an Islamist militant group blamed for a deadly attack on a cafe in Dhaka in July. Most of the militants were killed in a three-hour gun battle as security forces raided four hideouts on the outskirts of Dhaka. “We requested them to surrender but they opened fire at our officers instead and also exploded grenades,” said Home Minister Asaduzzaman Khan. The dead were believed to be members of a new faction of Jamaat-ul-Mujahideen Bangladesh (JMB), known as New JMB, which has pledged allegiance to Islamic State.