There was great joy among the Catholics of Bangladesh when, on 9 October Pope Francis announced the name of Archbishop Patrick D’Rozario of Dhaka among the list of new cardinals in the Church. In this overwhelmingly Muslim country, Catholics make up only a tiny minority of just 0.2%.

In recent years Christians and members of other religious minorities have increasingly been the target of attacks by extremists. For example, in November 2015 the Italian missionary Father Piero Parolari only narrowly escaped an assassination attempt. In July 2016 twenty foreigners were murdered by Islamist terrorists who took them hostage in a restaurant in the capital Dhaka. Responsibility for the attack was claimed by the terrorist group Islamic State. There have also been a growing number of similar attacks on Hindus and Buddhists.

Despite this, the Catholic faithful will not allow themselves to be intimidated. In this Year of Mercy especially, they have taken the opportunity to confront the violence and terrorism with pardon and forgiveness.

During this Holy Year the Catholic Church in Bangladesh has opened three Holy Doors. One of them is in the church of Our Lady of the Rosary in Hashnabad, within the Archdiocese of Dhaka. There are around 3,000 Catholics in this parish; their faith is strong and they play an active part in the life of the Church.

The parish church was built in the 1770s by Portuguese missionaries and is one of the oldest Christian buildings in the country. It was renovated not long ago in 2002. However, the adjoining presbytery, which was built 150 years ago, was in a very dilapidated state – so poor that it was at risk of collapsing at any moment. It was too dangerous to live in, in fact, and so the only thing to do was to demolish it.

Thanks to the generosity of our benefactors, we were able to contribute 15,000 Euros towards the cost of building a new parish house. This new centre, a two-storey building, provides living and working accommodation for the priests, offices for the parish secretariat, guestrooms, a meeting room for various purposes and a kitchen and refectory as well. To the joy of the priests and parishioners, this new building has now already been blessed and commissioned. They all want to express their heartfelt thanks to all who helped them, and promise their prayers for all our benefactors. 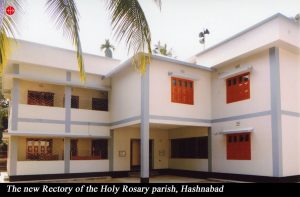