Bishop Paul Hinder, leader of the Church in Northern Arabia, says that the Pope will be met by a festive Catholic community composed mostly of hardworking migrants, when he travels to Bahrain next week.

Pope Francis is travelling to Bahrain from 3-6 November to be with the local Christian population, but the main purpose of his trip is to further develop interreligious dialogue with the Muslim world, according to Bishop Paul Hinder, current Apostolic Administrator for Northern Arabia, and an expert in interfaith issues

During a conference hosted by pontifical charity Aid to the Church in Need (ACN), the Swiss-born bishop stressed that this visit, during which Pope Francis will attend the “Bahrain forum for dialogue”, must be seen as a continuation of previous trips by the Holy Father to Muslim majority countries. “The Pope has already visited several Muslim countries, always with the same goal: to find a platform where, without compromising our beliefs, we can form positive constructive communities to build up the future and contribute to saving the world”, says the Capuchin Bishop.

What Christians and Muslims both want, says the Apostolic Administrator of the Vicariate of the Catholic Church in Northern Arabia, is a frank conversation that respects differences. 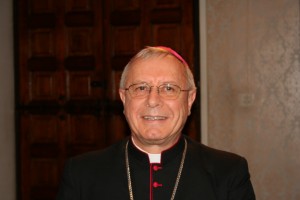 Italy, Rome 2010
Bishop Paul Hinder (Vicar Apostolic of Southern Arabia and the leader of the Church in Northern Arabia).

While stressing that the final results “of course do not depend on us, but on God”, the bishop believes that “if the two major monotheistic religions cannot find some understanding, then the world is at risk. We should be part of the solution and not the problems which are affecting many parts of the world. The Pope never tires of building bridges where people have stopped speaking to each other.”

In the complex reality that is the Gulf region, Bahrain occupies a special place. With a majority-Shiite population, but a Sunni royal family, Muslims make up 70% of the population. However, there are big communities of other religions, with 14% Christians and around 10% Hindus, mostly immigrants who do not have citizenship. For these reasons Bahrain is used to difference and has invested heavily in promoting understanding.

This is something that Pope Francis is expected to encourage. “He will probably ask the King to remain a bridge-builder in the region, because religiously and ideologically Bahrain is between Saudi Arabia and Iran, the two major powers in the Middle East, and it may play a special role as bridge builder, and I expect the Pope to encourage them to remain faithful to this role.”

Pope Francis will also be meeting with the Catholic community in Bahrain, and many faithful are expected to travel from neighbouring countries.

Although there is a very small indigenous Christian community, the vast majority of the 80,000 Catholics in this island kingdom are migrant workers from countries such as India, Sri Lanka and the Philippines. The Pope should expect to meet an enthusiastic crowd, says Bishop Paul Hinder. “The highlight will be the closing Mass at the national stadium, because knowing our people, it will be a very festive Mass. Around 28,000 people will fill the stadium, with at least 2,000 coming from Saudi Arabia”.

Although neighbouring Saudi Arabia is known worldwide for its lack of religious freedom, this does not apply to the archipelago of Bahrain, where different Christian denominations are allowed to build their own churches and the King even offered a plot of land to build Our Lady of Arabia, the largest Cathedral in the Gulf region, erected with the support of ACN benefactors. Christians make use of this freedom, says the bishop. “Part of the beauty of the ministry here is dealing with active Christians. There is no need to beg them to come to Mass, our main problem is lack of space. This gives us satisfaction and joy. I have been strengthened in my own faith by the faithful who have supported me all these years,” says the bishop, who has been working in the region for more than 18 years.

Pope Francis will be in Bahrain from 3 to 6 November. During the trip he will be again meeting with the Grand Imam of Al-Azhar, and holding an ecumenical prayer for peace with Christian leaders. Mass with the Catholic community will be on Saturday morning.