Pope Francis visited Azerbaijan as the last stop of his three-day trip. This was the first time the Pope ever travelled to a majority Shi’ite nation. There are only about 600-700, Roman Catholics in Azerbaijan, only 200 of whom have citizenship.

After landing at the Heydar Aliyev airport in Baku, the Pope celebrated Mass at the Church of the Immaculate Conception in the Salesian Center of Baku, the only Catholic church in Azerbaijan. Originally built in 1915, the church was destroyed by the communist regime in 1931. After St. John Paul II’s visit in 2002 the Catholic community was finally able to purchase the land to rebuild the church, which was completed in 2009. 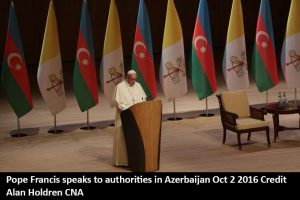 After having lunch with the Salesian Community, the Pope attended a Welcoming Protocol Ceremony in the square of the Presidential Palace in Genclik. He paid a courtesy visit to the President of the Republic Ilham Aliyev and his wife and met other authorities and members of the Diplomatic Corps. Francis had previously met with Aliyev and his wife at the Vatican in March 2015, where they discussed the life of the Catholic Church in the country, the promotion of interreligious dialogue and the importance of negotiation in conflict resolution. In 2011, an international agreement with the Holy See was ratified in Azerbaijan, further cementing a “stable regulatory framework for the life of the Catholic community” in the country.

In a meeting with political leaders, Pope Francis said  he had been particularly pleased to see “the cordial relations enjoyed by the Catholic, Muslim, Orthodox and Jewish” communities in Azerbaijan and criticised those who use God as an excuse for religiously-motivated violence. Francis stressed that “the attachment to authentic religious values is utterly incompatible with the attempt to violently impose on others one’s own vision, using God’s holy name as ‘armor.’”

Pope Francis warned that “Society must always overcome the temptation to take advantage of religious factors.”  He said that religions must always be respected in civil society, and can never be used as a tool to justify violence, “nor can they ever lend support to, or approve of, conflicts and disagreements.”

In his speech, the Pope emphasized how important it is, especially at the present time, to show the world how it is possible to express one’s own ideas and worldview without abusing the rights of those with differing perspectives. He added that a culture of peace is only fostered by an “untiring willingness for dialogue and by the awareness that there is no reasonable alternative to patiently and assiduously searching for shared solutions.”

Francis concluded by saying: “I am confident that, with the help of God, and the good will of those involved, the Caucasus will be a place where, through dialogue and negotiation, disputes and differences will be resolved and overcome.”

The Pope‘s final engagement was an ecumenical meeting at “Heydar Aliyev” Centre. This was attended by Allahshükür Hummat Pashazade, who as Sheikh and Grand Mufti of the Caucasus is one of the most influential Muslim voices in the world, local religious leaders of the Russian Orthodox Church and those of the Jewish communities.

In his final speech in Azerbaijan, Pope Francis spoke at length praising the good interreligious relations in the country. Even though it is a small presence in the country, the Catholic Church, the Pope said, “is truly present in the civic and social life of Azerbaijan; it participates in its joys and shares the challenges of confronting its difficulties.” He highlighted the good relations Catholics enjoy with Muslims in the area, indicating “the tangible help” that the Islamic leader has offered to the Catholic community on several occasions. He also pointed to the positive relationship between Catholics and Orthodox in the area, as well as the friendship they enjoy with the Jews.

The Pope noted that there is a desire within Azerbaijan to protect the religious heritage of each and to pursue greater openness,  adding that “it is not opposition but cooperation that helps to build better and more peaceful societies.” Francis prayed that religions, particularly in the Caucasus region, would be “active agents” in overcoming the tragedies and tensions of the past and present.