ARMENIA: Refugees from Nagorno-Karabakh fight for survival – with the help of ACN

Hardly noticed by the world, the conflict between Armenia and Azerbaijan escalated into war in Nagorno-Karabakh on 27 September 2020. A ceasefire between the two countries was negotiated on 9 November 2020. With countless war crimes, more than 4,000 fallen Armenian soldiers – almost an entire generation of young men – and around 90,000 refugees, this war added an as yet unseen layer of brutality to the long-standing conflict and brought about a humanitarian catastrophe.

Only about 25,000 of the refugees have been able to return to their homes. The others are stranded in Armenia, fighting to survive and to get back on their feet. 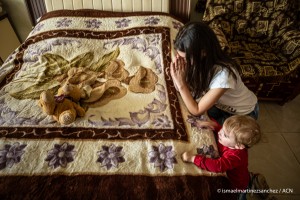 Mariam with her daughter Nane praying on the bed.
She lived in Nagorno-Karabakh before the war with Azerbaijan (September-November 2020), from where she had to migrate as a refugee to Artashat (near Yerevan) with her husband, daughter, brother-in-law and mother-in-law. Right now the whole family lives in a temporary refugee house with a minimal income.

In October, a delegation of  Aid to the Church in Need (ACN) visited Armenia to take a close look at the situation and to find out where the organisation can most effectively help now that state aid is no longer available and many charity organisations have left. It also gave them an opportunity to meet a number of refugee families. One of these families was Lida’s, who talked about her family and what they have been through:

Artashat is a small town located at the point where the borders of Armenia, Turkey and Azerbaijan meet. We have left the centre of town behind and are driving down a long and dusty gravel road that seems to lead to nowhere. The road is lined on both sides by deserted industrial plants –relicts of Soviet times. We turn off after about five kilometres and enter one of these premises. A house stands at its farthest edge, at first glance seemingly deserted. This is misleading, however. Lida, a blond, middle-aged woman, is waiting for us in the doorway. Her face is lined with weariness, but she, her daughter-in-law Mariam and her small granddaughter Nané are happy to have us visit them. While Mariam makes us coffee in the makeshift kitchen, Lida tells us about what they have experienced over the past year.

“We had a good life in Nagorno-Karabakh. I have been a widow for many years, but I was able to provide well for my two sons through my work as a teacher. We owned a small house and had everything we needed. This abruptly changed last year when, on 27 September, my two sons left to join the military and fight. They were 22 and 24 years old. This meant that we were alone with my daughter-in-law and the little one when the bombing started. We first tried to shelter under the table. Later, we hid in the cellar with a little food and water. There was already no electricity or running water. When the village elders told us that we had to leave the village, we first fled to Berdzor and then, a week later, were transported by bus to Armenia. All we had with us was a suitcase.

At first, we were able to stay with relatives in Artashat. But we couldn’t live there indefinitely. We were a burden for the family. We have been living here now for six months.” 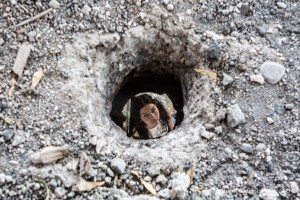 Mariam looking through the hole in the floor of the refugee shelter.
Mariam lived in Nagorno-Karabakh before the war with Azerbaijan (September-November 2020), from where she had to flee to Artashat (near Yerevan, Armenia) with her husband, brother-in-law, mother-in-law and daughter Nané. Right now the whole family lives in a temporary refugee shelter on a minimal income in a barely habitable house, next to a disused factory in the middle of nowhere.

She shows us the flat: everything is clean and tidy, but spartanly furnished with only the barest necessities and without electricity or running water – “we go once a week to get water from our relatives.” There is a huge hole in the ceiling, through which you can see into the first storey. The family took out a loan in order to be able to buy the most basic furnishings. “And that although we are still paying off the loan in Nagorno-Karabakh that we took out for the nursery when we found out that Nané was on the way. The bank there has no mercy. I have no idea how we are ever going to manage.”

The only assistance they received was a payment of U$D 150 during the first four months. Those who have lost a family member received a lump sum of U$D 20,000. Fortunately, both of Lida’s sons returned home from the war. However, she reports that the oldest is severely traumatised and unable to work. “My youngest son has at least been able to find work in the canning factory a little farther down the road. But the work is poorly paid, and he received his first wages only after six months. I am trying to help support the family by teaching two pupils.”

When Lida talks about her house in Nagorno-Karabakh, she has tears in her eyes. “They expect us to return to our houses – if they have not been destroyed. But it is not safe there. When in doubt, the so-called “Mirotvorcy” soldiers (the Russian “peacekeepers”) who are stationed at the border just look the other way. Azerbaijanis have occupied our house and blithely posted about it on Facebook.”

The loss of a roof over their heads, the loss of their work and thus their livelihoods, the trauma they have suffered – all of this has not only demoralised Lida and her family, but also thousands of others.

As is so often the case, the Catholic Church is the one to step into the breach and take care of the people when state aid is no longer available. The Church provides not only spiritual and psychological assistance to help deal with the trauma, but also material aid: the Church helps out when disabled veterans need accessible housing, when a few repairs will improve a family’s living situation or when, for example, a bathroom will keep a family from having to trek across the courtyard in below-freezing weather. 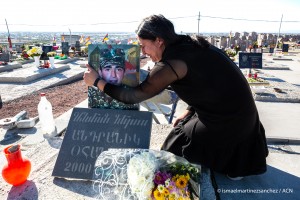 A mother inconsolably weeping at the grave of her deceased son, who died just a year ago at the age of 20, and is now buried in the Armenian military cemetery in Yerablur, Yerevan. This cemetery honors the soldiers who died for their homeland in the war against Azerbaijan over Nagorno-Karabakh in 2020.

As many families have – at least temporarily – lost their breadwinners (some of them are working in Russia, some remained in Nagorno-Karabakh or are undergoing rehabilitation), the Church is also helping destitute families make a living in a country with rising unemployment and prices. If at all possible, the Church is helping them to find work.

ACN is supporting the Church by assuming the costs of an emergency aid package for 150 families living in the city of Goris, which is located close to the border of Nagorno-Karabakh in Syunik Province, for a period of 15 months. The package includes all of the elements mentioned above: housing and subsistence aid as well as psychological and pastoral care.