ACN REPORT: A SIGN OF HOPE IN THE MIDST OF A HUMAN RIGHTS DISASTER

As people across the globe marked “Black Friday”, others turned up for a “Red Friday”, to express their support and solidarity for the many people especially Christians who are persecuted, sometimes even to the point of shedding their blood on account of their faith. 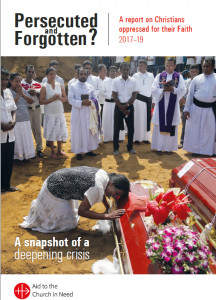 The launch of the report, “Persecuted and Forgotten? A Report on Christians oppressed for their faith 2017-19” was attended by benefactors and friends of ACN Malta as well as other invited guests at Villa Corinthia, Corinthia Hotel Attard with John Pontifex, Head of Press and Information of ACN United Kingdom and Editor in Chief of the report as keynote speaker.

The report bears out the finding of many surveys which all come to the same conclusion: Christians are the most persecuted faith group.  In terms of the number of people involved, the gravity of the crimes committed and their impact, the persecution of Christians is worse than at any time in history, the report highlighted.

Mr Pontifex described the persecution of Christians as a human rights disaster made worse by the scanty attention it has received by international media until now.  He shared the story of Antoine, a Syrian Christian whom he met in Aleppo, who told him how a gun was put to his head and a knife to his throat to abandon his faith. “The first question the ISIS fighter asked Antoine was, ‘Are you a Christian’? When Antoine confessed his faith, he was immediately captured and tortured”, he explained.

Mr Pontifex identified the key areas of concern in the report. “A multifaceted series of growing threats now mean that South and East Asia should be considered the new hotspots of persecution – massacres of Christians, demolition by bombs of churches, detention of faithful without charge, their rape, forced conversion, trumped up charges, campaigns of intimidation through the media – all this is what it means to be a Christian in Pakistan, China, India, Burma and Sri Lanka”, he said.

The second point according to him, is that the impact of increasing genocidal persecution has meant that Christianity is in danger of being extinguished in its Biblical homeland, notably Iraq and Palestine, with very worrying signs of change in Syria.

He however expressed relief that all hope is not lost, thanks to the work of organizations like ACN and

the generosity of its benefactors. “In every country I have travelled to, I have seen ACN in action; homes being rebuilt, food provided, sisters offering care for the elderly and the sick, churches repaired, and hope restored in many ways.”, he noted.

Specifically, ACN has helped with repairs of about 2,000 homes in Qaraqosh, the largest town in Nineveh, North Iraq. Some signs of progress include work and assistance to restart businesses, schools, orphanages and convents.

Mr Pontifex added that another glimmer of hope is the unprecedented level of public engagement with the topic of persecution to a degree never seen before. According to the report: “Initiatives by the International Community in response to the persecution of Christians emerged as a major theme. In the UK and elsewhere governments have appointed special envoys for religious freedom, championing the rights of faith believers both within government and secular society.” 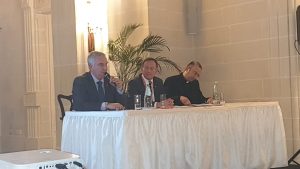 “The challenge however is to transform statements of intent into policies of action”, he said. He concluded that for many Christian communities teetering on the edge of extinction, there is no time to waste. If they are to survive, it needs to be a priority for all.

Mgr Professor Hector Scerri, ACN (Malta) Ecclesiastical Assistant, affirmed that it is always moving to listen to the narratives describing the persecution of Christians throughout the world. “Persecuted Christians are a visible sign of the suffering and risen  Christ. While their witness is a summons to solidarity, their suffering is a constant reminder of the call to Christian commitment as disciples of Jesus.  Mgr Scerri highlighted that three documents by Pope Francis offer a leitmotif to the ACN report launch in Malta. The Joy of the Gospel (2013) is what all Christians are called to proclaim, even against all odds. Rejoice and Exult (2018) is   a reminder of the last of the Beatitudes, where those who are persecuted for Christ’s sake are invited to rejoice because of the privilege to suffer on account of their Christian calling. Pope Francis’s document Christ Lives shows how the Lord lives, suffers and rises to a new life in the first-hand experiences of our persecuted Christian sisters and brothers.

The National Director of Aid to the Church in Need (Malta), Stephen Axisa concluded: “We express the hope that the report will help governments, policy makers, the international community and all who are concerned about humanitarian, social and moral conditions  to identify the extent and scale of the problem of persecution around the globe and take steps to address it.”

The report can also be accessed online at https://persecutedchristians.acninternational.org/