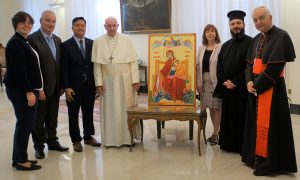 Our Lady of Sorrows Consoler of Syrians

Since 2011, Aid to the Church in Need (ACN) financed 850 projects helping 127,000 families, including orphans, minors, and sick in Syria.  With the support of benefactors, around 46,000 children, young people and students also benefitted from these projects, which provided emergency aid, pastoral care, and support to the livelihood of Christians in Syria.

The second part of the “Console my People” (Is 40:1) campaign for Syrian Christians organised byACN with Catholic and Orthodox Churches in Syria for families whose dear ones were abducted or killed during the eight years of conflict, commenced on Sunday 15th September 2019, with the blessing of the icon of the Blessed Virgin Mary, Mother of Sorrows and Consolatrix of the Syrian people by Pope Francis at Casa Santa Marta in the Vatican.

Pope Francis met with ACN delegation led by the International President of the Foundation Cardinal Mauro Piacenza.  Stephen Axisa, National Director of ACN (Malta), Marie-Claude Lalonde, National Director of ACN (Canada) and Jonathan B. Luciano of ACN (Philippines) were present for this occasion.  The delegation included Fr. Spiridon Kabbash, a Syriac Orthodox priest from Homs, Syria, who painted the icon for this campaign.

Spiridon Kabbash, Greek Orthodox priest from Homs in Syria, the author of the icon during his work.

On the same day, 6,000 rosaries blessed earlier by Pope Francis, were distributed in parishes of all 34 Syrian dioceses – both Catholic and Orthodox.

Altogether, some 2,000 Christian families lost one or more loved ones during the conflict and 800 had a family member abducted.