A WEEKEND OF SOLIDARITY AND WITNESSING

A WEEKEND OF SOLIDARITY AND WITNESSING

The Launch of 14th Edition of the Religious Freedom in the World Report by Aid to the Church in Need in Malta was accompanied by a series of meetings and activities.

From the floodlighting in red of Auberge de Castille, Valletta and the Good Shepherd Church Balzan to show solidarity with the persecuted Christians who shed their blood for the faith, to meeting with different groups to share the story of the suffering church, it was a packed weekend of witnessing. 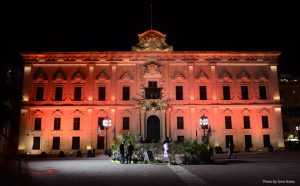 The Guest Speaker, Archbishop Ignatius Kaigama from Jos Nigeria visited a number of Parishes, Schools, Convents and Communities in Malta and Gozo.

The highpoint of the week was the launch of the Religious Freedom Report at the San Anton Palace on November 24 2018 which was attended by dignitaries including the President of Malta, H.E Marie-Louis Coleiro Preca, the Auxiliary Bishop and Vicar General, Mgr Joseph Galea Curmi, Representative of the Apostolic Nuncio, Mgr Francesco Javier Diaz Tenza, the Ecclesiastical Assistant of Aid to the Church in Need Rev. Prof. Hector Scerri, Guests and Benefactors of Aid to the Church in Need (ACN).

In his opening Speech, the Director of ACN Malta, Mr Stephen Axisa welcomed all and expressed appreciation to the President for her hospitality in hosting the event at San Anton Palace and to the Auxiliary Bishop for his constant support.

He stated that as an organisation committed to helping persecuted Christians, ACN has a particular duty to uphold the basic human right of religious freedom and draw the attention of all people to the grave discrimination facing Christians in so many parts of the world.

He disclosed that according to the report, 6 out of every 10 people around the world cannot express their faith with total freedom and this situation has deteriorated over the past two years. He stated that religious illiteracy, including within the media and the lack of political action in the West has exacerbated the problem leading to a situation where many minority faith groups suffer behind a curtain of indifference.

In his reflection, Mgr Joseph Galea Curmi, on behalf of the Church in Malta expressed appreciation to Aid to the Church in Need in Malta and internationally, for the efforts to lift this curtain of indifference by raising awareness on the plight of Christians who are suffering persecution and mobilizing all forms of support on their behalf.

“Malta is blessed that we don’t have this persecution but with the help of ACN we can see what is happening in other parts of the world and this will help us to live our faith with a wider vision. I wish all people will support the work of ACN”, he said.

Giving a personal account of the situation of religious freedom in Nigeria, the Keynote Speaker, Mgr Ignatius Kaigama explained that Nigeria has suffered infringements on the right to religious freedom through incidences of massive destruction to lives and property by the Boko Haram insurgents and militant Fulani herdsmen. Such incidences he said also include the abduction of school girls, the suffering of the internally displaced persons, denial of rights and privileges to Christians, disallowing the teaching of Christian Religious Knowledge in some Northern States, the kidnapping of Catholic Priests and Sisters, fear and the psychological trauma induced by fanatics or militants.

Archbishop Kaigama says the Church in Nigeria is a vibrant one.

“The faith of our people is incredibly solid despite all these attacks. Churches are always filled. We have children, youth, men and women and old people who love the Church and are passionate about the faith. Sometimes you go to Church and there are no seats for people because of the huge number.”

In the face of this great number of faithful, the Church is restricted on building new structures and the people cannot freely express this vibrant faith that they have.

“In the northern part of Nigeria, you are not allowed to own land to build a Church. In our Archdiocese, we cannot even hold Christ the King processions. For 10 years now we stopped open processions for fear of being attacked. We cannot have midnight Masses at Christmas or Easter”,

When we listen to this kind of experiences and many that resemble it, Mgr Galea Curmi says “we will better understand the demands of our faith and how we should live our faith by sharing with others and learning from their faith. Theirs is a witness which is so relevant for us. Their story shows that the deep-rooted faith they have is stronger than those who try to destroy it.”

“it is our duty to listen to their cry” – Fr. Hector Scerri

The Ecclesiastical Assistant of ACN (Malta), Rev. Prof. Hector Scerri described the persecuted Christians as “contemporary prophets” who are always in anguish, always alone and penetrated by hurt.

He said, “it is our duty to listen to their cry, to support them, to acknowledge their witness which is both prophetic and Christlike.”

“We can stop religious war” – H.E President of Malta 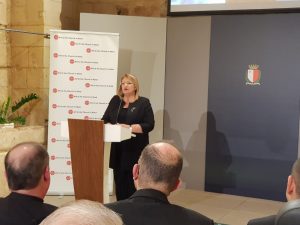 Citing examples in the world where religions co-exist peacefully such as Bulgaria, the President of Malta expressed the conviction that it is possible tor religions to live together in harmony. She called for an end to religious intolerance and the promotion of religious freedom and inter-religious dialogue in all spheres of society.

“People come to me and say, “Bishop allow us to fight. Collect money and buy guns for us to fight. I told them when I do that I am no longer a Christian or a Bishop. I would rather resign than do that. We can stop religious war through dialogue, tolerance, respect and understanding. Which is why I started the Dialogue Reconciliation and Peace Centre and the Interfaith Youth Training Centre.  At the centre, we hold meetings with warring groups to strategize on how to avert further killings and we also organize interfaith prayer sessions. 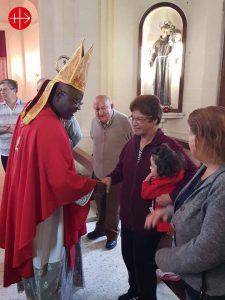 Mgr Kaigama expressed gratitude to all Maltese and Gozitans for their generosity and hospitality to the Church in Need. He said this is the second time he is visiting Malta and Gozo and he has always received a warm welcome and support.

“I want to express my gratitude to the benefactors and promoters of Aid to the Church in Need for all the good work you have been doing with your generous contributions, your solidarity and friendship with us during our moments of need. We need your continued help to retain our Christian faith and identity. The Christian faith is in danger of being wiped out. Help us to preserve our faith.”

“Let us keep up this bond of communion, of unity and love”, he said.

The Archbishop also visited the Ta Pinu Shrine Gozo, The Poor Clare Sisters and the Nigerian/Ghanaian Community at the University Chaplaincy.

With the launch of this report, ACN is inviting people throughout the world to stand up in defence of religious freedom, especially journalists, policymakers, academics, jurists and others seeking to assist persecuted and oppressed Christians.