World Day of Prayer for Vocations—the view from Ukraine

To mark the World Day of Prayer for Vocations, celebrated on Good Shepherd Sunday, which this year falls on May 8, Aid to the Church in Need (ACN) is sharing a series of testimonials of young men who have chosen to prepare for the priesthood. 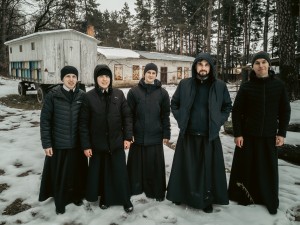 Currently, more than 100,000 young men are studying and training in seminaries around the world. Their experience can help us to delve into the mystery of priestly vocations and highlight how important it is that all Catholics pray for these young, brave, bold and generous seminarians, to help them as they discern God’s will.

Thaddeus grew up in the aftermath of the fall of the Soviet Union, at a time when Ukrainian society was undergoing a spiritual renaissance. As children, he and his two older brothers accompanied their mother and grandmother to the local Basilian monastery in Drohobych, near Lviv, the heartland of the Greek Catholic Church in Ukraine, and they were so fascinated and impressed by what they saw that when they returned home, they would play at celebrating divine liturgies in their living room.

As a community, people cherished the Church, which, despite persecution by the Soviets and forced integration into the Orthodox Church, had re-emerged. “At that time a lot of young people and teenagers went to the monastery to help the monks to rebuild. It made us feel part of one big family. Especially during summer holidays, we would go and help tend the monastery garden. We’d be there all day.”

This enthusiasm for the Church did not survive his teenage years, however. Tadey, as he is known, was a rebellious young boy, not especially good at school, and eager to be treated as an adult. When he realized that most of the town’s men stood outside church rather than go inside for the service, he decided that he had had enough, and stopped practicing.

One day something happened that would change all that, with a little help from ping pong. “I was in biology class and our teacher asked us how often we went to Church. For me it was a big challenge, because I knew that my mother went to church almost every day, and I didn’t know what to say, because I wasn’t practicing at the time.” Not wanting to betray his mother’s devotion, he decided to lie and say that he attended on Sundays and on feast days. “At this moment I made a commitment that I would go to church that evening.”

“On the way I thought to myself that I was being foolish, and that I’d be better off playing on my computer at home. But I went anyway. After the Divine Liturgy I went to play ping pong with the altar boy, and it was lots of fun. So, I started to go to church and then we played ping pong, every day, after the liturgy.”

Soon the idea of joining the monastery began to take shape in his mind but he knew there was an important obstacle to overcome. His father had been living abroad for many years, like so many other Ukrainians, working in Portugal to support his family. During one of his visits back home they were in the kitchen and his parents were joking around, when his father said to him: “One day you will have a wife, and you’ll know how difficult this is.” That was when Tadey dropped the bomb. “No, I won’t,” he said.

His father was shocked and urged him to go to university first. All year Tadey prayed for guidance until he finally decided that he would join directly after school. When he announced it to his father, who was still abroad, he asked for his blessing and felt a wave of relief when he received it.

Now he is finishing his studies and preparing to be ordained a Basilian priest. After that he will go to Rome to study further at the Biblicum Institute and to prepare himself to help his country out of the desert it is in at the moment. 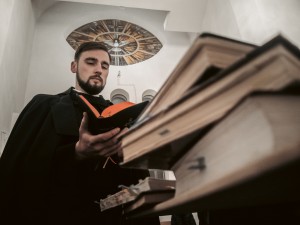 On February 24 Russian troops began an invasion of Ukraine. “Now the situation is quite tough, this is a very difficult time, a time of darkness,” says the seminarian. “Many people have gone abroad, to other countries, in search of refuge. However, there are people inside the country who do not have anywhere to escape to. There are many refugees in our monastery,” says Tadey, “and we try to help and support them.”

Tadey and other seminarians need all the help they can get to fund their training and their studies. Father Pantaleimon, rector of the Basilian seminary, confirms that it is harder every year to run things. “Since I became rector, we have had the same income but prices have doubled. That is why every year it is more difficult to run the seminary. Since the war began, the economic situation in Ukraine has become unpredictable.”

In this situation, help from institutions like ACN, which has been providing the seminary with financial support for many years, is essential. “We are grateful to all those who help us, especially Aid to the Church in Need, because this way we can serve people and carry on our mission.”