UKRAINE: “We have to give the people hope, guidance and strength”

The project manager for Ukraine of Aid to the Church in Need (ACN) reports on the solidarity visit to the war zone.

With the outbreak of the war, international Catholic pastoral charity ACN has been centred on providing aid to Ukraine. ACN has been active in this country since 1953 – first during the period of Communist persecution, then in the years of rebuilding after the collapse of the Soviet Union.

In response to the current situation, this aid has only intensified. ACN has approved several relief packages since the beginning of the war. The money helps to support the priests, religious and Church workers serving refugees and victims of the war in monasteries and convents, parishes and other Church institutions.

Just before Easter, ACN visited several locations in western Ukraine. Magda Kaczmarek, project manager for Ukraine at the international headquarters of the pastoral charity in Königstein im Taunus, Germany, was part of the group and, on her return, spoke to Volker Niggewöhner about her impressions. 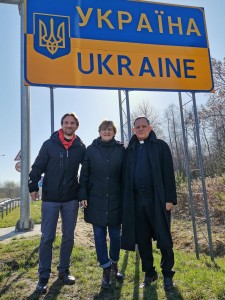 ACN: The battles in the eastern and southern parts of the country are still raging eight weeks after the Russian invasion of Ukraine began. What does this mean for the people?

Magda Kaczmarek: Ukraine is currently on a Via Dolorosa – the worst it has experienced since World War II. The pressure to flee is growing; the people are terrified and no longer feel safe. That is the tragedy unfolding before our eyes. We spent Holy Week in western Ukraine. We met many, many people there who have sought refuge with Church institutions. Most of them are mothers with children, and elderly people. It is a great humanitarian catastrophe and the people are suffering profoundly.

Where did you travel in Ukraine?

We first travelled to the archdiocese of Lviv, which is close to the Polish border. We were able to visit several parishes there that have taken in refugees. The seminary and the Order of Saint Basil the Great have also opened their doors to refugees, as have many communities of religious sisters. Furthermore, we visited the archbishop in Ivano-Frankivsk: the seminary there has also become a haven for many refugees.

The Ukrainian Greek Catholic Archeparchy of Ivano-Frankivsk is running a very impressive project. It has set up its own hospital to treat the wounded. Its staff includes physicians and medical personnel who were forced to flee from the eastern parts of the country. This gives them employment opportunities. It is very important that these people do not leave Ukraine and that is one of the goals the Church is working to achieve.

What impression did you take away from your meetings with refugees?

It was a very emotional experience. We met refugees who couldn’t stop crying. It was so important to just hold them for a while. And then there were the refugees whom the war has silenced. We met a young man of about 30 who has not said a word since the war began. I remember a small child who did not have anything to eat for two days while they were on the road. Many of them have eyes that look as though they are made of glass, faces that have been turned into stone. They are having trouble understanding what is happening around them.

We met refugees who had just arrived from Kramatorsk in eastern Ukraine. The railway station there was bombed on 8 April. The people had boarded the trains in panic and just kept going. They had no idea where they would end up, or what to expect there. 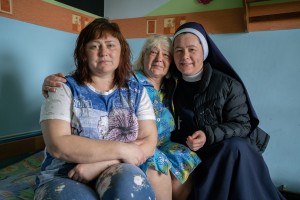 What was the general mood among the refugees: do they want to stay in Ukraine? How do they see their future?

At the moment, particularly the women with children and the grandmothers who arrive in western Ukraine tend to stay there. They desperately want to go back to their husbands, fathers and sons in eastern Ukraine. They don’t know if, or when, this will be possible. In many cases, their houses have been destroyed by bombs; they have lost everything. We talked to a family who told us that, after the conflict broke out in eastern Ukraine and Crimea in 2014, they first lost their home in Donetsk and now they have lost another in Kharkiv. They have to start all over again in western Ukraine. But they also want to remain in the country. Many feel they don’t have any other choice.

In spite of the Communist past, religion plays an important role in Ukraine. Has this proven to be the case now in this time of crisis?

Many of the refugees from eastern Ukraine are either not baptised or did not actively practice their faith. Now, at the refugee centres run by the Church, they are experiencing a living Church for the first time. In many of our conversations, we learned that the people are very grateful that the Church has taken them in and they feel the proximity of God there. We met people who had never gone to church before and now they are praying together – the rosary, for example. Denomination does not matter to the Catholic Church. All who come are welcome.

You were also able to speak with the leader of the Ukrainian Greek Catholic Church, Major Archbishop Sviatoslav Shevchuk, while you were in Ukraine. What was his message?

His primary concern was, “Help us! We have already lost 50 per cent of our economy.” According to the major archbishop, it is very important that foods and other products are not just shipped in to Ukraine from other countries, but that these are produced in the country itself wherever this is currently possible. That is the message of the Church: we have to give the people hope, guidance, strength. Particularly now, it is essential that the people are given hope.

What other forms of assistance has ACN committed to?

We have already paid out an initial relief package to support the work of the Church during the war. However, we continue to receive applications for other projects and have therefore increased our funding. At the moment, the greatest burden for Church institutions in Ukraine is ongoing expenses such as electricity, water, heating, etc. In the truest sense of the word, the Churches have opened their doors to everyone. The Gospel is truly being lived there. But this presents a financial challenge.

Transport vehicles are also urgently needed. In many cases, the humanitarian aid has to be transported across long distances, on roads that are either in very poor condition or have been destroyed. The Church is organising plenty of work in this area, and we are planning to do more here as well.