UKRAINE: Refugees share how the warm welcome they receive inspires them to help others

From the very beginning of the war, the Archdiocese of Ivano-Frankivsk, in West Ukraine, has been involved in welcoming fleeing women and children, most of whom are coming from major cities such as Kyiv, Kharkhiv, Zaporizhzhia, Dnipro and Odessa. 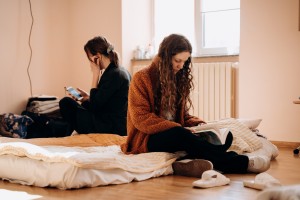 Sofia with her mother Viktoria in a room.
Families accommodated in the school in the Archbishop’s Vicariate General, Ivano-Frankivsk.

Sofia, just 14 years old,is one of these refugees. Together with her mother she has fled the war that descended like a plague on her life and, especially, on the once peaceful town of Brovary in the region of Kyiv.

Young people of her age already have a great deal to contend with, looking for meaning in their lives, already thinking of their education and of a future profession, perhaps even falling in love for the first time, but for Sofia everything is now very different.

Ever since they arrived in Saint Basil high school, Sofia and her mother have been trying simply to cope with their new life. This school in Ivano-Frankivsk, a city of some 300,000 in West Ukraine, is one of the places where the Greek Catholic archdiocese has been housing the newly arrived refugees. Sofia’s father stayed behind to defend his house and his country. Despite the danger, he feels a little more at peace knowing that his family is safe.

Aid to the Church in Need  (ACN) has been supporting numerous projects in the diocese for many years now, and provided immediate emergency aid in response to the war. The classrooms in Saint Basil high school have been turned into dormitories for up to a hundred people. Sofia is very grateful. “At least here we have a roof over our heads, warmth, good food, clothing, toiletries and, above all, peace”, she comments. Now she is trying to do as much as she can to help others. Her mother, Viktoria, has also volunteered to help those in most need. “There is no fear anymore, only the desire to help”, she says.

The archdiocese is taking up food collections in all the parishes. Some of this is for the refugees in Ivano-Frankivsk, 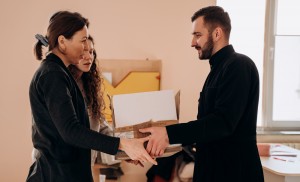 Viktoria receiving a food box.
Families accommodated in the school in the Archbishop’s Vicariate General, Ivano-Frankivsk.

the rest is sent to people in the east of the country. The refugees also have access to free medical care, thanks to the doctors at the nearby Saint Luke Hospital.

Once the war is over, there is only one thing that Sofia and Viktoria want, and that is to go back home, although they are far from sure if their house in Brovarywill even survive the war. Situated around 7 km from Kiev, it was hit by rockets in the first few days of the war, leaving seven people dead and around 17 injured.

“I worry most about my home, and my school“, says Sophia. “Will everything still be the same when I get back home? I don’t know,but I hope peace will come soon”, she adds. Of one thing she is sure: when everything gets back to normal again, the first thing she will do will be to meet with her friends and hug her father, who is the one she misses most of all.