Since the beginning of the war, the Archdiocese of Ivano-Frankivsk, in Western Ukraine, has been welcoming women and children refugees. The international charity Aid to the Church in Need (ACN) supports the archdiocese in this effort. Some of those who left everything behind spoke to ACN about their experience.

Vasilisa and Ulyana woke up one morning to see the fear in their mother’s eyes: the war in their country had taken on a new form. Aged five and nine, the two girls have already learned where to hide when there are bombings and what the rockets sound like. Their home city of Avdiivka, in the disputed region of Donetsk, in the east of the country, has seen frequent clashes since 2014. Now, due to the recent Russian offensive, it has become too dangerous to stay. Therefore, their parents decided to send the girls and their grandmother, Tetyana, to Ivano-Frankivsk, a city in the west of the country. 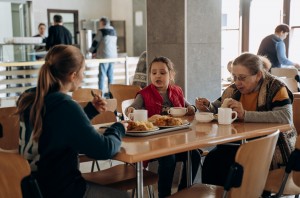 “We didn’t know exactly where we were going to end up, but the fact is that we are doing very well here”, says Tetyana. The three of them found refuge in the Saint Basil school, one of the shelters operated by the Greek Catholic Archdiocese which has been hosting internally displaced people. The classrooms in this school have been converted to dormitories which take up to 100 people. They have been living here for several days and one of the things they are most grateful for is not having to be afraid of falling asleep. The girls miss their parents, but when asked they say it is right that they both stayed behind in Donbass to help their country. 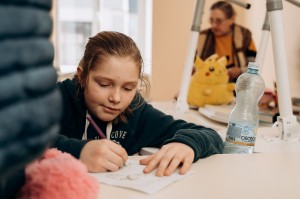 Ulyana with her grandmother Tetiana in the background.

“My parents stayed in Avdiivka, but now they don’t need to worry about us anymore, because here in the school it is peaceful, and we are well. They give us three meals a day and we go to music and to art classes, where we sing and draw. Yesterday we played on the school grounds, and we had to look for the snowman from the ‘Frozen’ cartoon. It was fun”, Vasilisa and Ulyana explain.

Tetyana listens carefully to her grandchildren, and says that her greatest dream is for the war to end and to be able to return home. “We long to return to Avdivvka, to our homes, where our friends and family are. Where else could we go if not home?” says the grandmother, her eyes glistening with hope.

ACN has been supporting projects in the Archdiocese of Ivano-Frankivsk for many years. Due to the war, at the end of February ACN sent a rapid emergency relief package. A new emergency aid package to help the internally displaced people, as well as to support ten parish houses where they are sheltering, is soon to be approved .