Missionary priest in Ukraine: “Their life is my life, their fate is my fate”

Enduring a war in the capital of Ukraine, Fr Lucas couldn’t feel much further from Brazil, where he was born and raised. Yet he refuses to leave the country and is moved by the many examples of hope that he has witnessed during this conflict.

Father Lucas Perozzi is in Kyiv, capital of Ukraine. Since the first days of the war, he and three other priests have hosted around 30 people in the parish of the Dormition of the Blessed Virgin Mary. Nowadays he doesn’t sleep or eat much, and during this period he even fell ill for a while. But even though he could leave the country if he so wished, he decided to remain with the people he came to serve and loves. 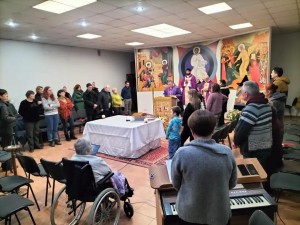 “In this time of war, the people couldn’t remain in their own houses and were spending their nights in bunkers and in underground stations. It was terrible, because these places are cold, dirty, and the atmosphere is very dark. They were scared, terrified. Those who came to stay with us can now sleep through the night, in a peaceful atmosphere, despite the war. There is brotherly solidarity here, people help each other out. When someone is down, sad and afraid, somebody else isn’t doing so badly and helps out”, Fr Lucas explains, while he gets on with his daily activities. While speaking to pontifical charity Aid to the Church in Need (ACN) he says that the sounds of war raged on all day long. Goods are getting scarce as well. “Some shops are still open, but their shelves are getting emptier every day. Medicine is starting to run out also”, he adds.

Fr Lucas has been in Ukraine since 2004. When he was young, he attended a meeting of the Neocatechumenal Way in Italy and ended up being invited to go to Ukraine, where he became a priest. His time in this Eastern European country has been closely linked to ACN. “We receive a lot of aid from ACN, and not only now during the war. The Diocesan Missionary Redemptoris Mater seminary, where I was trained, was, and continues to be, supported by ACN; thanks to ACN I was able to acquire a car here in the parish which I use for pastoral work; the church in which these 30 people are staying was built largely through the help of the charity, and I just heard that we have received emergency aid from ACN to continue our work, so we are very grateful!” 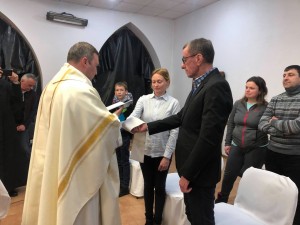 Fr. Adamski performs the wedding ceremony during the war in Kyiv.
He is a fellow priest of Father Lucas Perozzi in the parish

But the community still needs plenty of help. Fr Lucas says that a new family with two children has just arrived. In these circumstances people are looking above all for shelter and for spiritual support. According to the priest, not even war can extinguish the light of hope. “Yesterday we had a wedding, and we’re having another one today! People come to confession as well. It is impressive, because people come and ask us to marry them, even though they know that we can’t prepare anything fancy. They don’t have romantic illusions, they want to live through these days in the grace of God, as a family. Even amidst the war, we can see that God is love, He continues to love each and every one of us without limits”.

Life is difficult, and constantly dangerous, but it doesn’t cross Fr Lucas’ mind to leave Ukraine. “Their life is my life, their fate is my fate”, he concludes. And he is not alone. Like him, thousands of priests and religious chose to stay with the Ukrainian people, to be seeds of peace and hope in the middle of a war. Meanwhile ACN, which has been helping Ukraine with projects for over 60 years, has intensified its support for priests and religious sisters who provide the victims of this war with material and spiritual aid.