Consoling the suffering and providing shelter for the homeless

One month into the war in Ukraine, which began on 24 February, attacks on the capital have intensified and the number of people fleeing their homes in search of safety, protection and help continues to grow. Close to four million Ukrainians have crossed the border into neighbouring countries, but according to the UN High Commission for Refugees there are almost 6.5 million internally displaced people within Ukraine. They need protection and support.
With its institutions and organisations, but also its many monasteries, convents and parishes, the local Catholic Church possesses a large network of solidarity and aid. This includes the six monasteries of the Greek Catholic Basilian order, which are all located in the west of the country, and since the beginning of the war have taken in a large number of refugees. 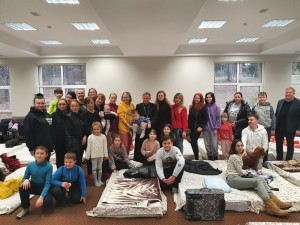 One of these is the Basilian provincial house, which has its own seminary and theological faculty, located in Briukhovychi, near Lviv. Around 150 people have found refuge in the building. Women and children fleeing the tragedy arrive every day. “It hurts. It is very difficult. Our men stayed to fight, and we left, I left with four children. I don’t know what to say, I am afraid, very afraid. We are from Kyiv, and the situation there is terrible at the moment”, says one of the refugees who has just arrived. Pointing to the baby in her arms, she adds: “She is two months old. We try to keep her as safe as we can, at least for now. We had to leave our husbands and I came with my daughter-in-
law, her baby and two teenagers. This is how it is, we never expected it”.

The days of fighting seem to drag on endlessly, “as if they have taken up half of our lives”. As she talks, her voice keeps trembling. One of the volunteers tries to console her: “Don’t worry, one day you’ll be back home, God willing”.
The refugees stay in the monasteries for as long as they can, many want to leave the country and the mothers and children arrive with a suitcase, nothing more. The crisis has turned out to be very expensive for the fathers, due to costs of utilities such as gas, fuel, electricity and water, not to mention medication and hygiene articles. ACN has just promised a new emergency aid package which will allow the six monasteries to continue to console the needy and provide shelter to those who need it. 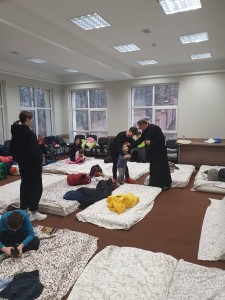 In the precious and historical monastery of the Exaltation of the Cross, in Buchach, the Basilian priests have also provided refuge for internally displaced people. For centuries, this institution, some 540 kilometres outside Kyiv, has been at the centre of the life of the Greek Catholic Church in Ukraine. Over 130 people have found refuge here, including Yehven. He arrived around two weeks ago from Kyiv, with his wife Ivanka and his children Lena, Yekateryna and Ivan. “We are very happy to have been welcomed so kindly and warmly. They have given us food and a roof over our heads. This monastery is home to very kind people and the volunteers are constantly helping us. We hope that the war will end soon, so that we can all go home. We are very grateful to the monks”, he says.

Halyna, a middle-aged woman who came to Buchach from Makariv, near Kyiv, also has a tragic story to tell. “We stayed for as long as we could, but in the end we had to leave because the bombing became too intense. Now everything is destroyed. We are very grateful to the monks who took us in, they have been very welcoming. I am not
exaggerating when I say we are very comfortable here. 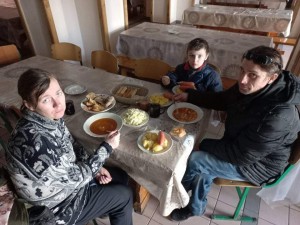 We hope that the war will end soon, so we can go back home. If, that is, there is a home to go back to. We are waiting for victory and for the end of the war. But we are ok here, and grateful to everybody for their solidarity”.