Bishop of Odessa: “In this war both nations are victims”

For the Roman Catholic Bishop of Odessa, Stanislav Schyrokoradiuk, one of the main reasons for the invasion of Ukraine is the way the Russian population has been misinformed: “We Ukrainians are the victims of the war; the Russian people are the victims of propaganda.” Last Tuesday the bishop took part in an online conference at the international headquarters of the Catholic foundation Aid to the Church in Need (ACN).

According to Bishop Schyrokoradiuk the war is “not a conflict between our two peoples”. However, people living in Russia have no access to complete information, “therefore many of them would support the Russian government.” This adds more fuel to the aggression. “I hope that their eyes will be opened, so that peace can come,” says Schyrokoradiuk.

“Keep walking the way of freedom, even if it is for all of us a way of the Cross”

Taking the wider view for Ukraine, the bishop emphasises that his country has no alternative to independence, freedom and orientation towards Europe. “That is our way which we have chosen. We want to keep going this way, even if it is for all of us a way of the Cross.”

The bishop says that his city of Odessa currently finds itself at the “epicentre of the war”. Every day there are air raid sirens and attacks. “So many ruins, so many tears, so much blood in our country.” In the first month of the war hundreds of children were killed or seriously injured. “Children have lost hands or feet in the bombardment; it is terrible!” The port of Odessa is currently blockaded; however, the Ukrainian army has been able to repel the advance of the Russian navy. 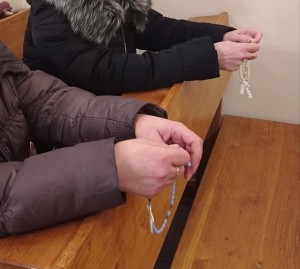 Ukraine
Prayer for the peace in Ukraine (Diocese of Odessa-Simferopol).

The situation is tense in the other two ports of Kherson and Mykolaiv to the north-east. Kherson has been completely occupied, and though the Russian army has pulled out from Mykolaiv, there are daily airstrikes, Bishop Schyrokoradiukexplains.

During the night of 28 to 29 March a building belonging to the Catholic parish was also destroyed in an attack, reports the bishop: “Nevertheless, many people in Mykolaiv want to stay, and that is my big concern.” All the priests in the conflicted areas have also stayed. “The priests drive from village to village bringing the people relief goods. They are very committed to their work, although it is very dangerous.”

Since the sea passage is cut off, the Diocese of Odessa-Simferopol has organised its own goods vehicles, which pick up food and medicine from Lviv in the West, often at the risk of life. Lviv is the central distribution point for goods which arrive from Poland and countries to the West. 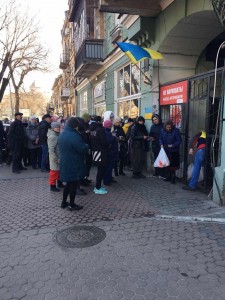 Humanitarian provision in the Odessa region has now to a large extent been secured, says the bishop: “We help without regard to religion or nationality – people from 120 nations live in Odessa.” Cooperation with other Christian denominations in helping the suffering population is going very well, including with the Ukrainian Orthodox Churches and the Protestants.

ACN is also an important support. Not only was the foundation the first to offer help, but it has also committed to financing further vehicles so that provision can be assured for people in remote villages. “We are very moved by the solidarity,” emphasises Bishop Schyrokoradiuk.

All in all, people in the war area are holding together firmly; there is even optimism, confirms the bishop. “People haven’t lost their sense of humour and try to see the positive side of life. That’s how Odessa is!”

After the beginning of the war in Ukraine ACN sent an emergency package. Further relief projects are on the way. The support helps priests and religious who work across the whole country with refugees, in orphanages and in homes for the elderly.