Bishop of Kharkiv, Ukraine: ‘I see a lot of trauma in people, in their eyes, their faces’

KHARKIV IS CURRENTLY ONE OF THE UKRAINIAN CITIES MOST UNDER FIRE. Many buildings and apartments have been damaged or even destroyed. In the first week of the war, a missile hit the bishop’s house in the Roman Catholic Diocese of Kharkiv-Zaporizhzhia. 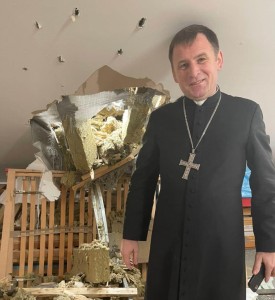 Despite the dangerous situation, Bishop Pavlo Honcharuk is staying with his people. Aid to the Church in Need (ACN) has sent an emergency grant for the diocese, so that it can cover its daily needs – gas, light, water, fuel and food – and help other people. In a telephone interview with ACN’s project manager for Ukraine, Magda Kaczmarek, spoke with Bishop Honcharuk about the dramatic situation in the city and the role of the Church.

You are in Kharkiv, a city which has become known internationally for the suffering of its people and which is in the news every day. How are you?

We have survived another night. We are alive and in good health. Every day people come looking for a way to evacuate the city. We help. Yes, there is constant shooting, but that is now normal. Everything is shaking, and it is very loud. The windows rattle as if the panes were about to fall out. We’ve got used to it being so loud. It even feels suspicious when it is peaceful.That is when we don’t know what’s coming. It’s as if parents were in the living room and could no longer hear their children in the bedroom: they get worried. We are living through a quite new and sad reality.

How are the people in Kharkiv?

They are sitting in bunkers and underground shelters. It is very dangerous. We are regularly visiting the people in the underground station, where they are living and sleeping on the platforms and in the carriages. We pray there together with others, Catholic and Orthodox together.

We are receiving humanitarian help – medicine, food, nappies and so on – which is reaching us from western Ukraine. Everything comes in little buses or cars, which are fairly inconspicuous and manage to get through better. Big trucks can’t get through the streets and the truck drivers are scared to come to eastern Ukraine.

Are the hospitals open?

The hospitals are working. We visit the sick regularly. Yesterday we were able to deliver sanitary pads to the psychiatric hospital, where people have had to get by without hygiene items for several days. The director thanked us with tears in his eyes. That is now our mission. A problem shared is a problem halved. We organize help where we can. A lot of relief supplies are arriving from western Ukraine, which come through the Polish border from all over Europe. That is a beautiful show of solidarity.

There is now a great exodus. We see pictures of huge numbers of people leaving the city. What is the situation?

I visited the train station where some very moving scenes were playing out which touched me deeply. Since no men between 18 and 60 are allowed to leave the country, the fathers are saying goodbye to their wives and children, not knowing when or if they will ever see each other again. Before the war many parents worked in the West and left their children with the grandparents. Yesterday another mother came from Poland and picked up her two children. She came in a bus with relief goods. The grandparents didn’t want to go with her. The parting was painful.

I see a lot of trauma in people, in their eyes, their faces. The children especially will suffer the consequences later. There will certainly be psychiatric illnesses after the war. We will have our work cut out for us.

Not in the sense that we knew it, of course. But people still want to come to confession. Either they come here or, since we live in constant danger, we meet them somewhere among the houses halfway in between.

It is important to pray and to survive so as to help those people who are alone and have no one else to help them. There is so much need – not just for material things but also for goodness, for human warmth, a kind word, a hug, a telephone call. That is how we witness to God’s presence, to the fact that He is with us. That is a way of passing on the Gospel. That is our pastoral care today. There are so many witnesses of love. A lot of very beautiful things are really happening here.

The situation in Kharkiv and in other places continues to become more dramatic. As the crisis deepens, ACN is supporting priests and religious so that they can continue their pastoral and charitable work. ACN is also providing emergency help to the four Greek Catholic exarchates and the two Latin dioceses in eastern Ukraine, which cover Kharkiv, Donetsk, Zaporizhzhia, Odessa and Crimea. Aid to the Church in Need is also asking for prayer for peace in Ukraine.