Amid the chaos of war, priests and sisters refuse to leave. “We cannot be anywhere else”

With millions trying to escape Ukraine, some insist on staying behind to help those who cannot flee. Among them are the diocesan workers, volunteers, priests and religious of the Kyiv-Zhytomyr diocese. Even the nuns are donating blood, and everybody knows that in remaining they are risking their lives. ACN has supported projects in the diocese for many years and has just given emergency aid of almost a quarter of a million euros due to the war. 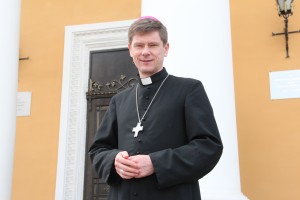 Bishop Vitalii Kryvytsky, of the diocese of Kyiv-Zhytomyr, is one of the many church leaders in Ukraine who has refused to leave his flock. The Latin Catholic diocese encompasses the capital city of Kyiv and the surrounding areas, which are coming under increasing pressure as Russian troops close in, in an attempt to surround the city.

As the war in Ukraine proceeds into its fourth week, the diocese, which is being supported by pontifical charity Aid to the Church in Need (ACN), shared a report which details not only the suffering to which the people are subjected, but also the effort made by the Church to alleviate it and provide assistance.

Despite the immediate danger to the lives of all who stay, the clergy, led by the bishop, remain with their communities. Bishop Vitalii is adamant that at a time like this “we cannot be anywhere else”.

According to information sent to ACN, “many villages and towns are in a state of humanitarian disaster, and many citizens have no water and food.” 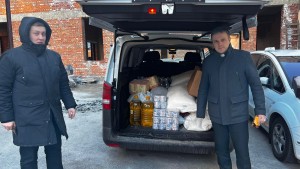 “The diocesan curia team with priests, nuns and lay persons has delivered water, food and medication to different places, where it was needed and possible to reach. The diocesan staff also helps in evacuating people from dangerous places”, said Fr. Mateusz Adamski, responsible for the aid sent by ACN.

As rockets and missiles rain down daily, the community takes some solace in knowing they are not alone. Organisations like ACN continue to provide emergency aid supporting the efforts of the Church to help the most fragile, such as people with disabilities, pensioners, large families and internally displaced people. “We send our gratitude for your solidarity with us and unity in prayer. These weeks of war in Ukraine were the hardest and the most tragic in the modern history. We are convinced that God is helping us to survive these difficult times through your prayer and your help”, he said.

This mission requires more than generosity, danger to life is real. The mayor of Hostomel, located outside Kyiv, was shot dead as he distributed bread and medicine among the community, according to media reports confirmed by the diocese. “The humanitarian mission and volunteering are in danger now because of immediate risk to lives, but we continue to provide it where needed. . We as the Church of Christ are with our people who are in danger, in need, vulnerable, frightened, wounded and weak”, assures Father Mateusz. 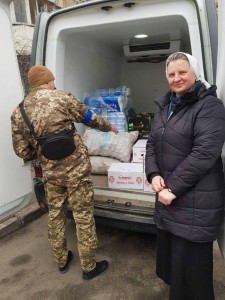 People try and help in many ways, seeing in these acts an image of Christ. “Due to the fact that there are many wounded civilians and soldiers every day, there is a need for blood donation, so residents of Kyiv have donated record amounts of blood to help both Ukrainian defenders and wounded civilians. The nuns, who remain in the Kyiv-Zhytomyr diocese, also became donors, because it is possible for them to do what Jesus did for us when He shed His blood so that we might live, to save the life of someone else.”

As the war heads into its fourth week, and the violence shows no signs of abating, the figures which describe the unfolding tragedy continue to rise. According to official UN figures, quoted by the report, close to 3 million people have fled Ukraine since the invasion began. According to other Ukrainian sources, the shelling has damaged 117 hospitals, 379 schools, and even 43 ambulances. Catholic leaders, both inside and outside Ukraine, continue to appeal for an immediate cease-fire.

ACN is supporting priests and religious in the diocese of Kyiv-Zhytomyr so that they can continue their pastoral and charitable work. In 2021 the charity had 41 projects running in the diocese and since the war broke out it has been providing support to over 300 priests and religious. The pontifical foundation is also providing emergency help to the four Greek Catholic exarchates and the two Latin dioceses in eastern Ukraine which cover Kharkiv, Donetsk, Zaporizhzhia, Odessa and Crimea. Aid to the Church in Need is asking for prayer for peace in Ukraine.