Aid to the Church in Need (ACN) is commiting immediate emergency help to support the
work of the Church in Ukraine. “What we all wanted to avoid has happened: Ukraine is in a
state of war. ACN has supported the Church in Ukraine during the past and it will not
abandon her at this very critical and difficult time,” said Thomas Heine-Geldern, Executive
President of ACN.

The Russian government officially ordered the deployment of Russian forces in the Luhansk
and Donetsk regions of Ukraine and started a broad military operation even on the Ukrainian
territory.

With the aggravation of the crisis, ACN is supporting with emergency aid the 4,879 priests
and religious brothers and 1,350 religious sisters in Ukraine, to enable them to continue their
pastoral and outreach programs. Furthermore, the pontifical foundation will provide
emergency help for the four Greek-Catholic exarchates and the two Latin dioceses in Eastern
Ukraine, covering Kharkiv, Zaporizhya, Donetsk, Odessa and Krym. 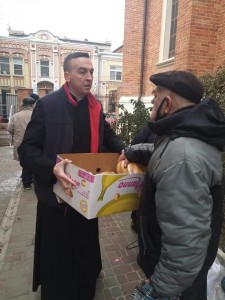 Ukraine, diocese of KHARKIV-ZAPORIZHZHYA-LAT
Photo: A priest distributing food to the needy

“Especially now, ACN has to ensure the presence of priests and religious sisters and brothers with their people, in the parishes, with the refugees, in the orphanages and homes for the vulnerable and for the elderly who, while already poor, will face the added challenge of
surviving in a climate of spiralling costs as a result of this war,” said Heine-Geldern.

Mons. Pavlo Honcharuk, bishop of Kharkiv, one of the dioceses in Eastern Ukraine which is under a direct threat of invasion, and which ACN will support, said: “The situation is getting worse every day. We live now from hour to hour. Prices are rising, especially for essential
goods. The situation is very difficult. The number of persons who are now asking for help from priests and sisters is increasing significantly.”

With the emergency grant, ACN will support priests and religious men and women so that they can help others who have nothing.
The financial situation in Ukraine has deteriorated since the beginning of the war, eight years ago, but since the crisis began in January, the national currency, the hryvna, has steadily been devalued, and continued to decline after Russia recognised the two breakaway regions led by pro-Russian separatists.

“This conflict is also a psychological war. People need consolation, strength and support. The immediate emergency aid by ACN, in addition to its current support, will strengthen the Catholic Church in Ukraine in its commitment to stay on the ground and keep serving its communities in the face of military and economic war,” said ACN Executive President.